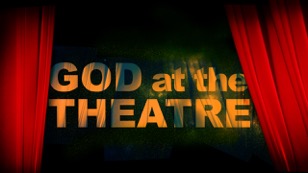 “All the world’s a stage, and all the men and women merely players.”[1]

That’s a line from Shakespeare’s play, “As You Like It.”  I don’t know if the playwright William Shakespeare knew anything about the reformer John Calvin, but they had a similar thought.  Calvin, in his commentary on the psalms, said,

“The whole world is a theatre for the display of the divine goodness, wisdom, justice, and power.”

I think James, the writer of our scripture reading today might agree.  James would say that life is an opportunity to live out our faith, and in so doing to show others the glory of God.  To help us do that better, James holds up a mirror to us and asks us a hard question. “This is what you’re doing.  Is this really what your faith teaches you to do?” He says:

“My brothers and sisters, do you with your acts of favoritism really believe in our glorious Lord Jesus Christ?” (James 2:1)

Acts of favoritism.  Partiality.  Prejudice.  All of us would probably agree those are bad, and that we shouldn’t do them.  None of us fully realizes how much we do them anyway.  We tend to do exactly what James warns us not to do. At the beginning of his letter he says,

Stories told in books and literature, on TV, in movies, and in the theater are mirrors showing us our behavior, helping us to see what we look like, sometimes simply by getting us to laugh at ourselves.  That’s what happens in the musical many of us went to see this weekend, “Nice Work If You Can Get It.”  I was laughing so hard at some points that my tears were messing up my glasses!  The production was excellent, as they always are.  I had high expectations based on what I’ve seen in previous musicals, and because Friday morning Ralph Wilson was giving it rave reviews, although he might have been a little bit prejudiced since his granddaughter Kaci Wilson was in it.  I saw Kaci on Friday morning, too, and as we parted ways, I said what I know you’re supposed to say to performers, “Break a leg!”

Do you know why we say that?  Because every play has a cast.  (Thank you, Diane DeFranco-Kling.)

Right up front, now, a bit of full disclosure – my opinion of this play is most definitely influenced by the fact that it was directed by one of our church elders, Dennis Dutton. I’m not impartial. Not that it wasn’t wonderful, because it was, but I’m sure it was extra wonderful to me because many of the performers are people who come to our church – Betsy Dutton, Will Dutton, Larry & Amy Brownlee, Alyssa Hershey.  And already, right there, just in naming those people, and not all the others who are in the play, I’m displaying even more partiality.  I hope no one is feeling excluded right now, and if you are, I apologize for that.  It’s one of the pitfalls that James wants us to see.

Did you hear about the actor who fell through the floor boards?

Don’t worry. He was just going through a stage.  (pitfall or pratfall?)

James says, For if a person with gold rings and in fine clothes comes into your assembly, and if a poor person in dirty clothes also comes in, and if you take notice of the one wearing the fine clothes and say, “Have a seat here, please,” while to the one who is poor you say, “Stand there,” or, “Sit at my feet,”  have you not made distinctions among yourselves, and become judges with evil thoughts? (2:2-4)

It’s really a rhetorical question.  Most of us wouldn’t argue with this.  It’s most definitely an example of showing partiality.  And it happens all over the place in the musical “Nice Work If You Can Get It.” 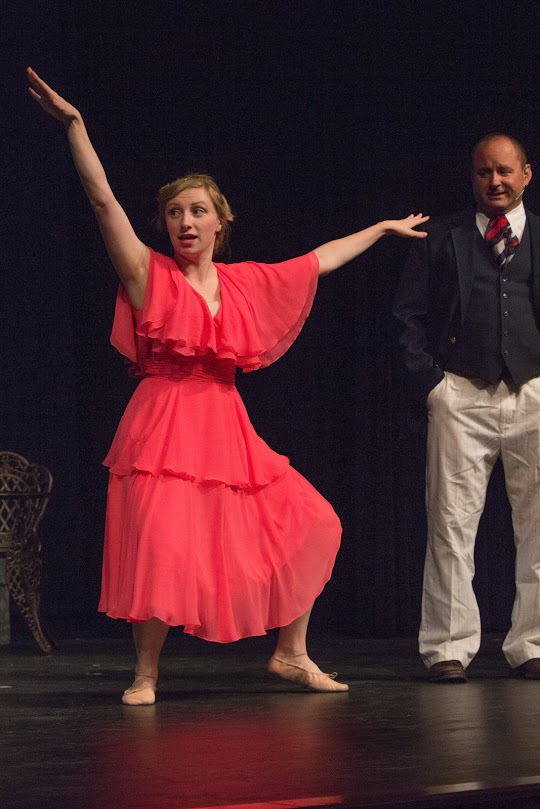 In many ways the musical is the standard love story.  Boy meets girl.  Boy and girl fall in love.  Boy loses girl.  Boy wins girl back. But of course, it’s not that simple, and it’s glaringly obvious right from the beginning that partiality is making things complicated.  In the play, just like in our reading from James, people that aren’t rich are treated differently and dismissed.   Rich playboy Jimmie Winter needs to please his mother, so he’s marrying Eileen Evergreen, an eccentric modern-interpretive dancer.  He doesn’t love her.  She doesn’t love anyone but herself.  But she’s acceptable because she is rich and she’s the daughter of a senator. 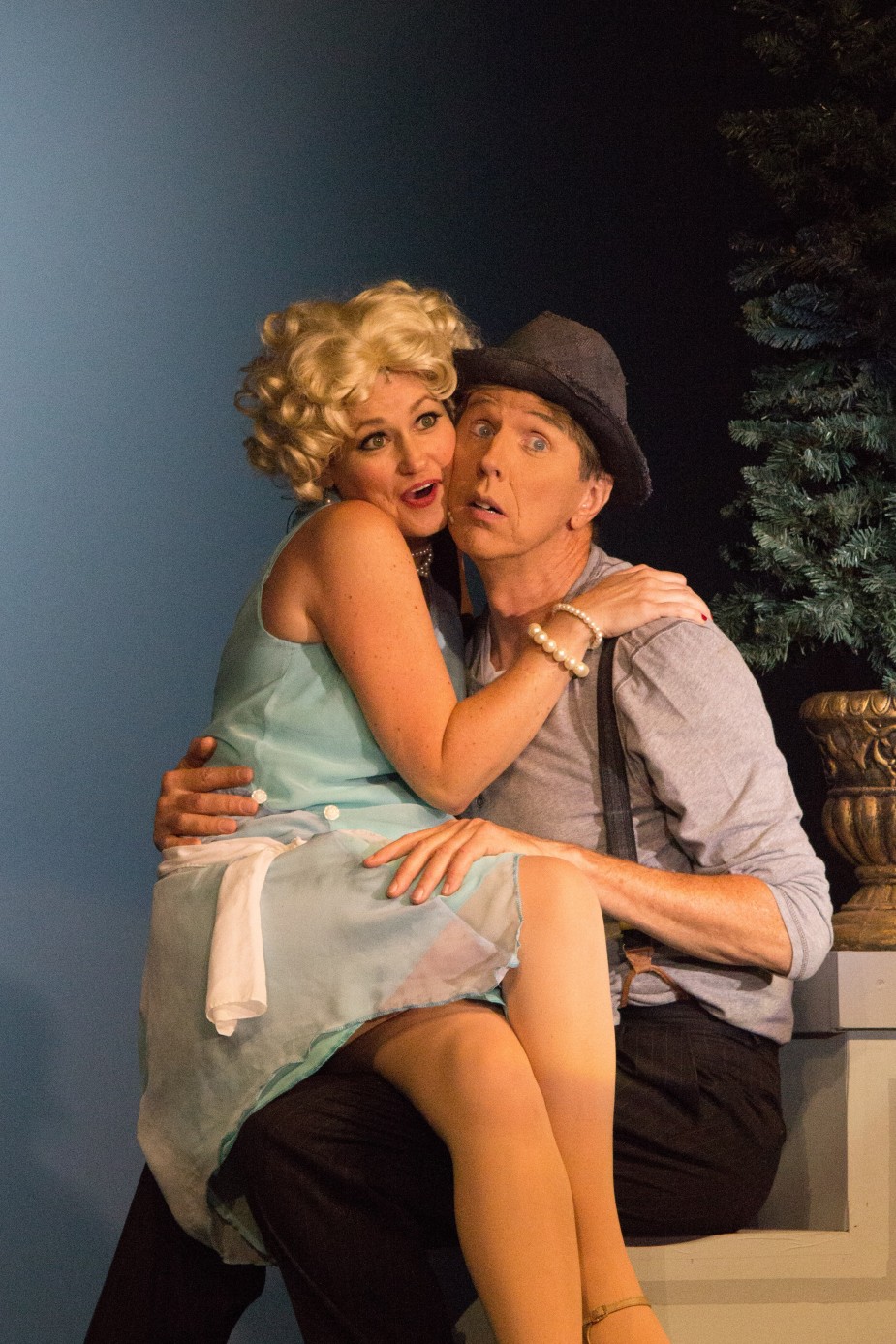 She wouldn’t be throwing herself at him if she knew he was really just one of the bootleggers.  And here we not only see the play poking fun at our partiality toward the rich and famous, but we also get the idea that for the characters in the play, all showgirls are gold-diggers.Another example is the romance between Jeannie Muldoon and Duke Mahoney.  She’s a showgirl who gets mislead into thinking Duke is actually royalty, and that if she marries him she might be able to become the Queen of England someday. 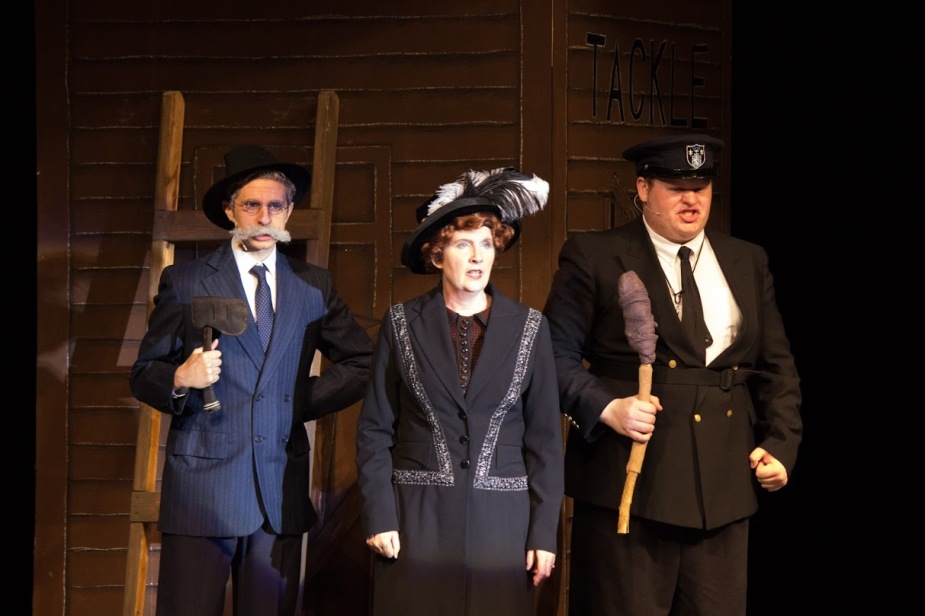 Another one of the other major dividing lines in the play is between those who are ok with alcohol and those who aren’t.  The Senator’s sister Duchess Estonia is on a campaign to get rid of the speakeasies where people go to drink that “demon rum.”

If we were to go up to one another and say, “You’re prejudiced” or “You’re judgmental” or “You’re showing favorites to the wrong people for the wrong reasons,” we might not be all that inclined to listen.  But if we can laugh about it together, we might see that we’re actually laughing at ourselves.  One of the most hilarious scenes in the show is when Duchess Estonia, head of the women’s temperance movement, gets drunk because the butler spiked her lemonade. 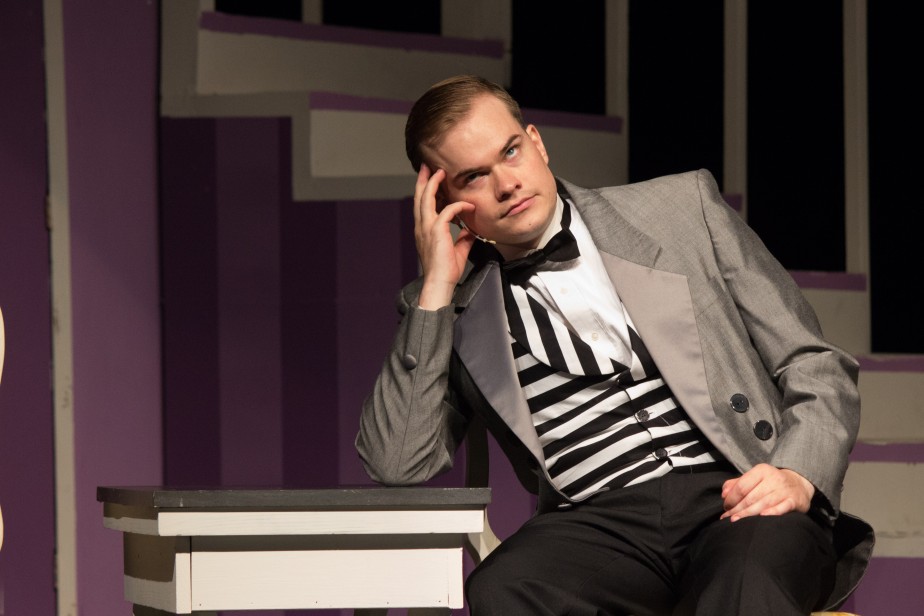 The duchess, normally a pompous and strait-laced woman, suddenly is acting silly and out-of-control.  Betsy Dutton did a fabulous job with this.  We were so busy laughing, we almost missed the words of her great epiphany:

“Ever since my husband died, I’ve spent my time trying to be just like my big brother here – judging people and telling them how to live their lives.  But then this man – this odd little man – poured me a glass of lemonade, and gave me a taste of what it was like to sing and dance and be gay again!” 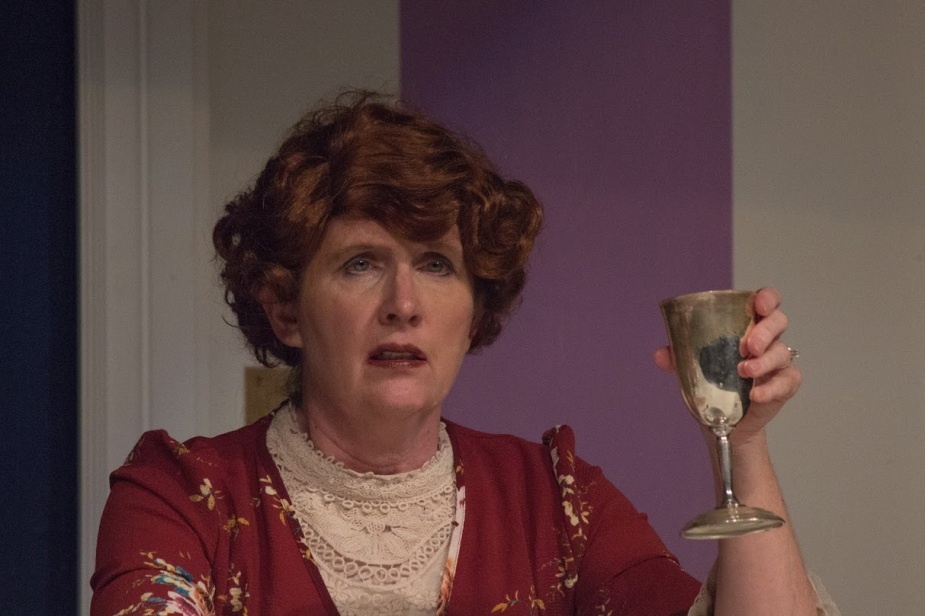 That’s the crux of the problem.  We get caught up in judging people and miss out on the joy of loving one another.  Of course, in the play, that means people almost miss out on getting together with their true love: 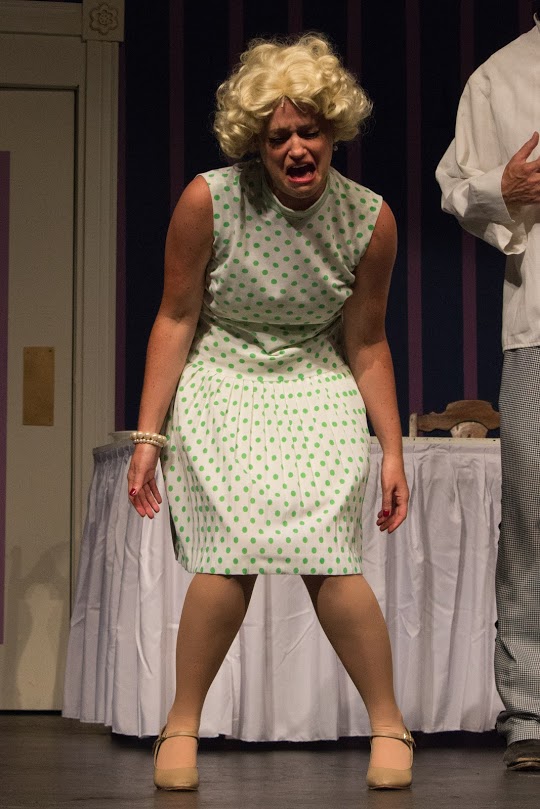 “If you show favoritism, you sin and are convicted by the law as lawbreakers.” (James 2:9)

The law he’s talking about is the one we heard from Leviticus 19:

“You shall love your neighbor as yourself” (19:18).   What’s happening that makes us do this and not realize that we’re doing it is a natural survival instinct called “tribalism.”

Tribalism is defined as “the behavior and attitudes that stem from strong loyalty to one’s own tribe or social group.”

The prophet Samuel does it when God sends him to anoint Israel’s next king.  God sends Samuel to Jesse’s house and tells him he will anoint one of Jesse’s sons.  Samuel sees the oldest son Eliab and thinks, “Surely this is the one.” But God says,

“Do not consider his appearance or his height, for I have rejected him. The Lord does not look at the things people look at. People look at the outward appearance, but the Lord looks at the heart.” (1 Samuel 16:7)

We naturally gravitate towards people who are more like us because it’s safer, and we give them preference when we are choosing friends, choosing employees, choosing leaders, and who we worship with.  It’s just something we do.

It’s impossible to be completely impartial because it’s built into how we make sense of the world and feel safe. [2]

Even when we don’t want to do it, we still do it.

That’s why it’s important to be aware.

There’ve been lots of studies done about this.  One that probably wouldn’t surprise us uses the tribalism we have about sports.  Two sports fans each rooting for different teams watching the same football game will see what happens differently depending on how it affects their team.  They both see the exact same thing, but they understand and interpret it differently as if they’d seen two different games.[3]

Tribalism has positive influence on us as well.  It helps protects us, helps us find provision, and helps us develop relationships.  We all belong to tribes, based on where we live, where we go to school, leaders we follow, ideas we connect with, books we read, movies and tv shows we watch, genres we prefer.

Tribalism is powerful and influences our behavior so strongly that it can even make us do things that don’t make reasonable sense.  In small ways by giving preference to one person over another in church or at our schools or jobs, and in big ways by causing wars and genocide.

Our denominations are a form of tribalism.

So is giving preference to someone who is a Christian, or assuming that everyone who comes into our church knows all our hymns and traditions.  We display tribalism in our connection to a particular church, and in the groups we connect with inside the church.

We aren’t ever going to be able to be totally impartial, or get rid of tribalism so we need to be aware of how it can be misleading us. The danger is in thinking we can be impartial.

1 Corinthians 10:12 warns us: “if you think you are standing firm, be careful that you don’t fall!”

So what do we need to do?

God so loved the world that he sent his only son Jesus.  The gospel is of primary importance.  We are followers of Jesus, and Jesus died and was resurrected for us all, rich or poor, protestant or catholic, church goer or not church goer, college attender or not, farmer or not.  We can’t let the ways we are different divide us.  Our witness as believers has much greater power when we are united, not just as PC(USA) Presbyterians, not just as United Presbyterian Church attenders, but as followers of Jesus.

Don’t demonize those you differ with.

In Nice Work If You Can Get It the duchess demonizes alcohol.  She calls it “demon rum.”  In the church, we can fall into demonizing those who go to a different church, or who don’t go to church.  We might think those who go to a certain kind of church are bad, or those who like a certain kind of music.  Or those who have a different political opinion.  During the last presidential election, it was common to hear people saying, “You can’t be a Christian and vote democrat” or “You can’t be a Christian and vote republican.”  People who truly believe that can be pretty hard to convince otherwise, but I can promise you that Jesus died for both republicans AND democrats AND independents AND libertarians and all those who can’t vote or don’t want to vote. Jesus died for those with high-paying jobs, and those who don’t have a job. Those who manage their money well, and those who don’t.

Even bootleggers and people that swing from chandeliers.

Jesus loves ALL of us the same.

Jesus told us that the way we treat one another, whether we’re united or divided, is critical.  He said, “By this everyone will know that you are my disciples, if you love one another” (John 13:35).