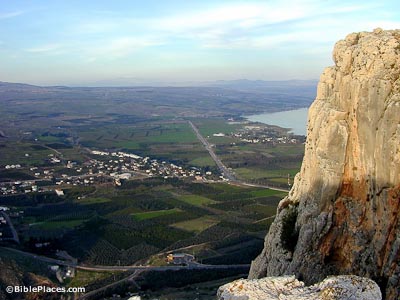 The first time that I got to preach in my home church I was nervous.  I wanted the congregation to enjoy the sermon and be proud of me, and I hoped it would be meaningful to them. But I didn’t give any thought to whether they would want to throw me off a cliff afterwards.  In the eight years since, my sermons have prompted a variety of responses, and sometimes no response, but, thank God, so far nobody’s tried to throw me off a cliff.

In our scripture reading today, throwing off a cliff is the response Jesus gets in his hometown synagogue in Nazareth. Jesus reads from the scroll of Isaiah, and then tells the people gathered there that he is the fulfillment of that scripture. Jesus then reminds them that prophets are typically unable to be effective in their hometown, using Elijah and Elisha as examples. The people of Nazareth are amazed at how well Jesus speaks, but they are also filled with rage and try to throw him off a cliff.

What is it about Jesus’ words that makes them so angry? As we consider what might have prompted their anger, we can also consider: What makes us angry?  It’s a particularly timely question, since in our current era of social media spats and growing political divisions, “anger is all the rage.”[1]

What makes the people rage against Jesus?  It is likely that the people heard Jesus claiming to be the messiah.[2] The reading from Isaiah was a prophecy about the changes the messiah would bring to the world.  Since the people in Nazareth had known Jesus all his life, they couldn’t imagine how he could be the messiah. This makes his words blasphemy, and punishable by stoning (Lev 24:13-16 et al).  In throwing Jesus off a cliff, they are throwing him at the stones.[3]

This story about Jesus reminds me of the story in Genesis of Joseph who went to tell his brothers about his dreams in which they were all bowing to him.  Joseph was their younger brother and their father’s favorite. They despised him, so they couldn’t imagine why in the world they would ever bow to him.  They didn’t throw Joseph off a cliff, they threw him down a well, but then changed their minds about leaving him there to die and took him out of the well and sold him into slavery (Gen. 37).  Little did they know that their actions would begin a chain of events that led to Joseph becoming the governor of Egypt and that they would indeed bow to Joseph.  Joseph tells them in Genesis 50:20 “You meant it for evil, but God used it for good.”  Their actions go too far, but we can understand their anger.  We know about favoritism and jealousy.  We can imagine how arrogant Joseph must have sounded to his brothers.  Maybe Jesus also sounded arrogant to the people of Nazareth who had watched him grow up, and who never expected him to do more than be a carpenter like his dad.

There’s a TV show called The Good Doctor that’s like this.  A young medical student gets a residency at a prestigious hospital where his mentor is the chief of surgery.  The young man is brilliant but he’s also autistic.  He sees things differently and so is able to suggest cures that the other doctors haven’t thought of, but he is often scorned and dismissed because people just see him as the autistic kid.  They can’t imagine he might actually know what he’s talking about.  But the good doctor very often turns out to be right, and his insight saves lives.

In Luke’s gospel, we read that after the people in Jesus’ hometown of Nazareth tried to throw him off a cliff, he went to Capernaum and sent a demon out of a man.  Then he went to Simon’s house and healed Simon’s mother who was suffering with a high fever.  I wonder if the people in Nazareth heard about these events and began to regret their earlier response to Jesus?  We know that Jesus wasn’t blaspheming, he was revealing the truth about who he was, but they couldn’t see that there might be another explanation, and instead got angry.

How might we be getting angry instead of asking God to help us see?

In Luke’s narrative, it’s worth noting that the people get angry after Jesus reminds them that Elijah wasn’t sent to help the widows in Israel during the famine, but instead to a widow in Zarapeth, a Gentile city on the northern coast.  And Elisha didn’t heal the lepers in Israel, but instead healed Naaman, a leper from Syria. During the time in Israel’s history to which Jesus is referring, the kings had led the people to worship idols, and their persistence in worshipping idols led to the fall of Israel and their exile to Babylon. Maybe Jesus has touched an emotional trigger, reminding them of past sins and lack of faith.[4]

We too have emotional triggers, and it’s helpful to know what those are so that we can respond more rationally.  Advertisers and newscasters know what our triggers are, and they make sure to use them to keep us watching and reading and buying.[5]  Websites and television stations make their money based on the number of readers and viewers, so they work hard to draw us in and keep us coming back, hoping we’ll buy what they’re selling.  They know that getting an emotional response is what accomplishes this, so they make sure that headlines and teasers are as provocative as possible.  Though Jesus tells us to love our enemies, the media know that we are easily tempted to anger and hate.

Hate is what makes the prophet Jonah angry.  God tells Jonah to go to Nineveh to tell the people to repent or he will destroy their city. But Jonah doesn’t want to help his enemies, so he tries to hide from God instead.  When he gets swallowed by the whale and then spit back out, Jonah relents and goes to Nineveh, where the people listen to his message. The Ninevites turn from their wickedness and are saved.  But then Jonah is even more angry because God has spared his enemies the Ninevites.  He tells God:

“I knew that you are a merciful and compassionate God, slow to get angry and filled with unfailing love. You are eager to turn back from destroying people…just kill me now so I don’t have to see this.” (Jonah 4:2-3)

Jonah’s anger might be hard for us to understand.  We know that Jesus taught us to love our enemies, but Jonah couldn’t bring himself to do that, and instead wallowed in his anger.

James 1:19-20 tells us to be like Jonah knew God is, to “be quick to listen, slow to speak, and slow to get angry. Human anger does not produce the righteousness God desires.”

Sometimes we get angry because we’re responding to the way we understand the current situation. It can be very challenging to consider that there might be another way to understand a situation.  When I was a kid, my brother and I would get into fights, as most kids do.  After sending us to our rooms to cool off, our parents would bring us together to talk about what had made us angry so that we could each hear the other’s perspective.  I remember being surprised that my brother’s perspective made sense once he explained it, and so I grew to see the value of taking the time to talk with people and understand why they think and act the way they do.  It’s why we will continue to work on having opportunities to meet with small groups for Bible study and discussions about how we are to live as Jesus followers.

We can’t go back in time and talk to the people in the crowd that day in Nazareth to understand why they responded with anger, but we can talk to one another about what makes us angry.  It’s tempting to avoid doing this because it’s humbling and challenging and scary.  We’re not always successful because we’re more focused on talking than we are on listening. 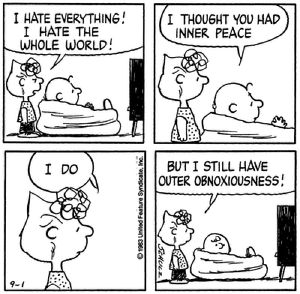 Sometimes it’s challenging because when God is working on our hearts we can be grumpy about it, like Sally in this Peanuts cartoon.  She tells Charlie Brown, “I hate everything!  I hate the whole world!”  Charlie Brown says, “I thought you had inner peace.”  Sally replies, “I do, but I still have outer obnoxiousness.”

What makes us angry?  Sometimes we need to ask God to help us see.

Jesus’ claim to be the messiah made the people angry because they couldn’t see that God could work that way.  They were looking for a different kind of messiah.  They were expecting a strong warrior like David.  Maybe they forgot how David started, as the runt of the family, the one that God told Samuel to anoint even though he didn’t look like king material.  God told Samuel, “The Lord does not look at the things people look at. People look at the outward appearance, but the Lord looks at the heart” (1 Sam. 16:7).

Maybe they forgot that God loves us so much more than we can fully comprehend. Or that God promised us a hope and a future.  This week our memory verse is one of God’s promises:

“For I know the plans I have for you,” declares the LORD, “plans to prosper you and not to harm you, plans to give you hope and a future.” – Jeremiah 29:11

Through our faith in Jesus, the Spirit of the Lord is upon us to proclaim the good news of release to the captives, comfort to those who mourn, and God’s favor and grace for all people.  God loves us so much that he sent us Jesus so that all could know this good news.

May we receptive to the ways that God is working in us, and may we be willing witnesses to the difference Jesus makes in our lives, and may no one throw any of us off a cliff.

[1] Kelsey Dallas, “Is there a religious way to get angry?” Deseret News, https://www.deseretnews.com/article/865685018/Is-there-a-religious-way-to-get-angry.html

[2] Dallas Willard in The Divine Conspiracy says, “They tried to kill him because they understood clearly that he was claiming to be God’s anointed leader, whereas they knew him to be only “Joseph’s son,” the carpenter, who had worked for wages from many of those present.” (p. 136). HarperOne. Kindle Edition.

[4] Fred Craddock in Interpretation: Luke says “Anger and violence are the last defense of those who are made to face the truth of their own tradition which they have long defended and embraced.” (pg. 63), John Knox Press.