Lead us not into temptation….

Today is the first Sunday in Lent, the forty-day season of preparation for Easter.  It’s common for people to give up something for Lent, things like coffee, chocolate, sugar, TV, shopping, or social media. This week, after Ash Wednesday, the mischievous side of me was sorely tempted to post this question on Facebook:  How many of you have given up social media for Lent?

Fasting for Lent is a centuries-old tradition, which is probably why the Gospel reading for the first Sunday in Lent is always the story of Jesus being tempted in the wilderness for 40 days.  That’s also how long Lent is. The number forty is common for times of testing and prayer in the Bible.

It’s important to notice that Luke puts this story about Jesus being tempted immediately following his genealogy of Jesus.  In Matthew’s gospel, the genealogy starts with Abraham and ends with Joseph, the husband of Mary, the mother of Jesus (Matt 1:1-17).  But Luke goes backwards, beginning with Jesus and ending with Adam (“…son of Adam, son of God.” Luke 3:38).  Adam was in the first temptation, in the Garden of Eden with Eve.  They were tempted by the serpent to eat the apple.  They gave in to the temptation and were cast out of Eden forever. Now, in today’s reading, Jesus is being tempted by the devil and does NOT give in to temptation.

The book of Hebrews tells us about Jesus: For we do not have a high priest who is unable to sympathize with our weaknesses, but we have one who was tempted in every way that we are, yet was without sin. (Hebrews 4:15)

Jesus was fully human and fully God.  He was tempted just as we are, and therefore fully understands what we go through as humans.  But he was also God, so his temptations are somewhat unique to him.[2]

In the first temptation, the devil says, “If you are the Son of God, command these stones to become loaves of bread.”  Well Jesus IS the son of God, as Luke has just reminded us in the genealogy, and Jesus could indeed turn stones into bread if he wanted to.  And since Jesus has been fasting for 40 days, the human side of Jesus surely wanted some bread.

Instead Jesus quotes from Deuteronomy: “Man does not live by bread alone, but by every word that comes from the mouth of God.”  During his time in the wilderness, this is likely exactly what Jesus has been doing, living on the words of God, talking to God and listening for God’s word.  Interestingly, in the Gospel of John, the only one that doesn’t include this story of Jesus’ temptation, Jesus says, “I am the bread of life. Whoever comes to me will never go hungry.” (John 6:35)

In the second temptation, the devil turns up the heat a bit.  He shows Jesus all the kingdoms of the world, and says, “To you I will give their glory and all this authority . . . It can all be yours if you worship me.”  (Luke 4:6-7)  It’s kind of funny that the devil offers Jesus authority, because Jesus already has all the authority he needs, as Luke shows us in the stories that follow this one.

After Jesus leaves the wilderness, he goes and teaches in the synagogues, where “They were astounded at his teaching, because he spoke with authority.” (Luke 4:32)  Then Jesus casts a demon out of a man, and They were all amazed and kept saying to one another, “What kind of utterance is this? For with authority and power he commands the unclean spirits, and out they come!” (Luke 4:36).

In the third temptation, the devil tries a different approach. He takes Jesus to a pinnacle of the temple and quotes scripture to Jesus.  His words are from Psalm 91, which we read earlier:

“If you are the Son of God, throw yourself down from here, for it is written, ‘He will command his angels concerning you, to protect you,’ and  ‘On their hands they will bear you up, so that you will not dash your foot against a stone.’” (Luke 4:9-10, Psalm 91:11-12)

Jesus’ response is a bit of double entendre.  Jesus again uses a verse from Deuteronomy:  “Do not put the Lord your God to the test.” (Luke 4:12, Deut 6:16)  In one sense, he is saying that Jesus will not test God in this frivolous way, but also he’s chastising the devil for testing Jesus who is God.

We may not be tempted in exactly the same way Jesus was, but we will be tempted, and, in fact, we are most vulnerable to temptation when we think we are not susceptible to it.

Paul warns of this in his letter to the Corinthians: So if you think you are standing, watch out that you do not fall. (1 Cor. 10:12)

Those people who thought they could refrain from smoking while holding a cigarette were greatly under-estimating our human weakness in the face of temptation.

Instead of focusing on the object of our temptation, we can turn our eyes to Jesus and focus on him.  Like the words of the song, turn your eyes upon Jesus, look full in his wonderful face, and the things of earth will grow strangely dim in the light of his glory and grace.

In all of the temptations the devil offered to Jesus, the common factor was the temptation to take the easy way out, to stop his hunger instantly, or to rule in glory without going through all the challenges that were to come.  This temptation to avoid the pain and suffering of death on the cross would come again through Peter who said, “No, Lord, you don’t need to die.”  Jesus said to Peter, “Get behind me, Satan,” (Matthew 16:23, Mark 8:33.)  And then in the Garden of Gethsemane Jesus wrestled with the temptation to walk away rather than face the painful death that was to come, saying Father, if you are willing, take this cup from me (Luke 22:42).

Maybe our greatest temptation is to take the easy way out.

We all face temptations, but Jesus not only knows the temptations we face, he does not leave us to face them alone.  In fact, Jesus didn’t face them alone either. At the beginning of our reading, Luke tells us that Jesus was “full of the Holy Spirit . . . and was led by the Spirit in the wilderness” (Luke 4:1). Jesus came with the Spirit and armed with scriptures that were commonly taught to Jewish children, scriptures that the Holy Spirit helped him to remember, just like the Holy Spirit helps us to remember.

It’s important that we are reading our Bibles and learning God’s word because it helps us to be prepared for one of the devil’s most common tactics, causing us to question God.  In the Garden of Eden, the serpent says to Eve, “Did God really say that you must not eat from any tree in the garden?” (Gen. 3:1)  In the wilderness with Jesus, Satan says, “Didn’t God say he would keep you from falling?”  In both cases it sounds right, but it’s not quite right.  Adam and Eve fall for it, but Jesus knows better.  He knows God’s word because he is the word made flesh, and he is God.

We will face temptations.  But not these guys 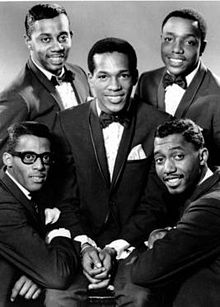 .  These are The Temptations, the singing group from the sixties and seventies.  These are the guys who sang My Girl, talking ‘bout my girl, and Just My Imagination.[4]

We will face temptation, and we will sometimes fall, but we are never alone. Our Psalm for today reminds us of this.  Its words are so encouraging and comforting that people used to make amulets with these words in them to help them feel God’s nearness and be reminded of God’s providential care.[5]

Those who love me, I will deliver; I will protect those who know my name. When they call to me, I will answer them; I will be with them in trouble, I will rescue them and honor them.  With long life I will satisfy them, and show them my salvation. (Psalm 91:14-16)

God’s salvation comes to us through Jesus Christ who did not give in to the temptation to take the easy way out, but instead endured the shame of the cross to conquer sin and death so that we might be forgiven, and so that we could have the assurance of God’s unfailing love and presence.

Let us keep on trusting in Him.

[1] Read more about the number 40 in the Bible here: https://www.gotquestions.org/40-days-Bible.html