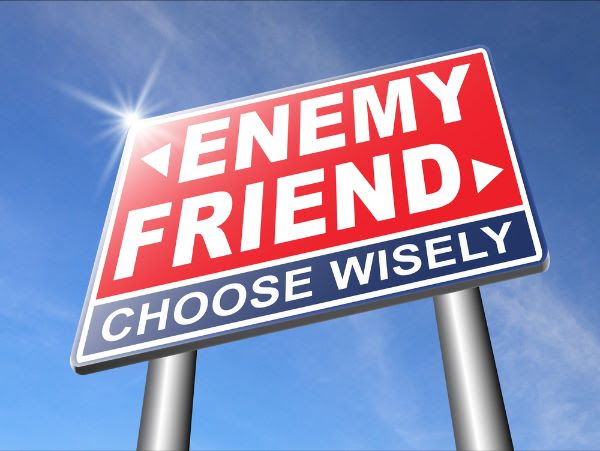 I’d like to start us off today with a deeply serious question about friendship:

Why can’t you be friends with a squirrel? They’ll drive everyone nuts.[1]  (And they’re very distracting.)

Now a truly serious question: What does it mean to be a friend? (Be there when someone needs you, somebody who helps you can’t help yourself, listens, maintains a confidence.)

Proverbs 17:17 says “A friend loves at all times.” That’s a pretty high bar for a friend, but a good one to shoot for.

Now another question for you: What does it mean to be a frenemy? A frenemy is one who seems to be a friend but then also acts like an enemy. For example, in this verse from the psalms David describes a frenemy:  Psalm 41:6 They visit me as if they were my friends, but all the while they gather gossip, and when they leave, they spread it everywhere. Has this happened to you?  Or have you done this?

Another verse about frenemies sounds very much like what happened to Jesus with Judas, the disciple who betrayed him:  Psalm 41:9 Even my close friend, someone I trusted, one who shared my bread, has turned against me.

Judas was a frenemy. In our story for today from Acts 9, who is the frenemy?  Saul.  He thought he was a friend of God, he was passionate about doing God’s will, but instead he had become God’s enemy, so Jesus stopped him in his tracks and turned him around.  Jesus got in his face.

The story begins with Saul “breathing threats and murder against the disciples of the Lord” (Acts 9:1).  He was on a mission to find and arrest those who belonged to “the Way”[2] and bring them back to Jerusalem to be put into prison.  Jesus had been sentenced to death, and those who followed him were guilty of heresy.  Saul was passionate about his mission to root out these sinners, and so he prosecuted them zealously, so zealously that he prosecuted women just the same as men, something he himself points out as remarkable when he’s telling his story later on (Acts 22:4).

This man Saul is the man we know more commonly as Paul, the great missionary to the Gentiles, and the writer of much of the New Testament.  (Saul = Paul) We may have assumed that his name change was a result of the conversion on the road to Damascus that we read about today, but actually he was always both Saul and Paul.  Saul is the Hebrew version of his name, and Paul is the Latin equivalent.  It’s not until Acts 13 that he stops being referred to as Saul and from then on is known as Paul, because he had gone beyond Jewish circles and was hanging out with people who spoke Latin.[3]

In reading Paul’s letters in the New Testament, we see that Paul was passionate about the gospel.  He didn’t stop being passionate when he met Jesus on the road to Damascus, he just changed the focus of his passion.

To us, he is Paul, but at the time of our story, he is still very much a Hebrew authority, and so he is Saul.  Regardless what we call him, when Saul meets Jesus, he is changed.  But Ananias didn’t believe that.  “The Lord said to him in a vision, “Ananias…”

“Get up and go to the street called Straight, and at the house of Judas look for a man of Tarsus named Saul. At this moment he is praying, 12 and he has seen in a vision[a] a man named Ananias come in and lay his hands on him so that he might regain his sight.”  (Acts 9:11-12)

You can bet this made Ananias nervous.  He knew who Saul was and what Saul had been doing.  If they knew Saul was coming, Ananias and his fellow Christians in Damascus had probably already been working on ways to hide from Saul so they wouldn’t be arrested and dragged off to Jerusalem.  Why would he expose himself to danger by going to Saul?  Why would he help a man who was most definitely his enemy?

But Ananias is a friend of Jesus, and if Jesus says to help Saul, then Ananias must help Saul.  I imagine Ananias was still a little wary of Saul, though, in case Saul was really a frenemy.

Saul thought he was doing the right thing when he was going after Jesus’ followers, and so he did it zealously.  He didn’t see that Jesus wasn’t just a man, or even just a prophet.  Jesus is God, and in going after Jesus’ followers, Saul was fighting against God.  He was doing exactly what the Jewish leader Gamaliel, Saul’s mentor, had said not to do.  We saw last week that Gamaliel had said to leave the disciples alone because if their movement was not of God, it would die out on its own. “But if it is of God, you will not be able to overthrow it, and you would be found even to be fighting against God!” (Acts 5:39)

Saul was so focused, so intent and passionate, that he couldn’t see things any other way.  When the bright light of Jesus blinded Saul for three days, Saul spent three days in darkness getting reoriented, praying and fasting.  This is reminiscent of what happened to Jonah, who spent three days in the belly of the whale after he refused to do what God had told him to do.  After Jonah came out of the whale, he went immediately to do what God had said. This time of darkness or confusion is a common part of conversion stories.[4] There is a period of disorientation when we are being changed, and it isn’t always clear at first what’s happening to us. We are being reoriented, or rebooted.

A good question to be asking God is, “What is it you want me to do?”  I have spent a lot of my life asking God that question, and I am convinced that asking that question is what brought me to where I am today. We don’t always get clear answers. One time in particular God answered that question directly and clearly.  I had been asking for awhile.  As I was reading my way through the Bible a little bit each day, I came to Acts 2, the story of Pentecost, to the part where the people have seen the Holy Spirit fire descending on the disciples, and they’re confused, so Peter explains by telling them the story of Jesus. At the end of his speech, the people ask Peter the very same question I was asking God: “What shall we do?” (Acts 2:37) I got very excited to read Peter’s response, because I felt like God was pointing me to these words, and answering my question.  His answer:  “Repent.”

I read the question and the answer again three or four times.  That’s what we do when we don’t like the answer.  We ask the question again, hoping for a different answer.  Repent?!?  That’s it?  We talked last week about how Peter had a surprising switcharoo, a surprising turnaround, being changed from someone who denied knowing Jesus into someone who couldn’t stop telling people about Jesus.  Repentance is to turn around, to change.

Jesus got Saul to change by making it impossible for Saul to keep going forward on his mission to find and arrest Jesus’ followers.  Jesus blocked Saul’s way, and then sent Ananias to help Saul see a new way.

Saul had become God’s enemy, and in telling about it later, we see that he realizes this.  He tells Timothy: “Christ Jesus came into the world to save sinners—of whom I am the worst.” (1 Timothy 1:15)

“I was shown mercy so that in me, the worst of sinners, Christ Jesus might display his immense patience as an example for those who would believe in him and receive eternal life.” (1 Timothy 1:16)

Jesus told us something similar.  Jesus said he considered us friends if we were willing to follow his teachings, and through his life and teachings and death and resurrection, he showed us the heart of God:

“No longer do I call you servants, for the servant does not know what his master is doing; but I have called you friends, for all that I have heard from my Father I have made known to you.” (John 15:15)

Jesus is our friend.  He laid down his life for us.  He conquered sin and death for us.  He is resurrected for us.  All so that we could be forgiven of all the things that get in between us and God.  All that he asks of us is that we change our focus from the things of the world, from our selfish desires, and instead focus on him.  If we don’t, if we say we are Christians but aren’t continually renewing our focus on Jesus, and doing what he tells us to do, we can become frenemies.

In the song “Jesus Friend of Sinners” by Mark Hall and Matthew West, they ask us to consider a very tough question – How are we keeping people from Jesus?  Who is running after Jesus but is tripping over me?[5] I don’t want to be Jesus’ frenemy.  We don’t want to be keeping people from Jesus.  The refrain of the song is a challenging prayer, “God, break my heart for what breaks yours.”

As a church we are in that in-between time of conversion – like Saul, like Jonah.  We know we need to change, so we’re asking the right questions, and we need to keep on asking and watching for God to surprise us with his answers.  God may be leading us to stop doing some things that are getting us off track or are tripping people up who are trying to find Jesus.  God may be leading us to reach out to people we wouldn’t expect.

Have you ever gone somewhere unexpected to say or do something you did not anticipate because you believed Jesus was sending you? What happened?[6]  How has God surprised you with unlikely friendships?[7]

[3] Or it may be symbolic of owning a change in identity that became clearer as Paul was telling the story of his namesake Saul in the Old Testament. This is the theory Sean McDonough proposes in his article: McDonough, Sean M. “Small Change: Saul to Paul, Again,” Journal of Biblical Literature, 125 no 2 Sum 2006, p 390-391.

[4] “Acts is strewn with these accounts of conversion that demonstrate the cultural and social transformation which is worked when the gospel is heard and believed.” Willimon, William H.. Acts: Interpretation: A Bible Commentary for Teaching and Preaching (p. 79). Westminster John Knox Press. Kindle Edition.  In Acts 8 & 10 in the conversion stories of the Ethiopian eunuch (8:26-40), and a centurion named Cornelius (10:1-11:18), they each experience a time of disorientation followed by a reorientation. Peter does the converting, but in the process, his also changed. Willimon also includes the Samaritans (8:4-25).