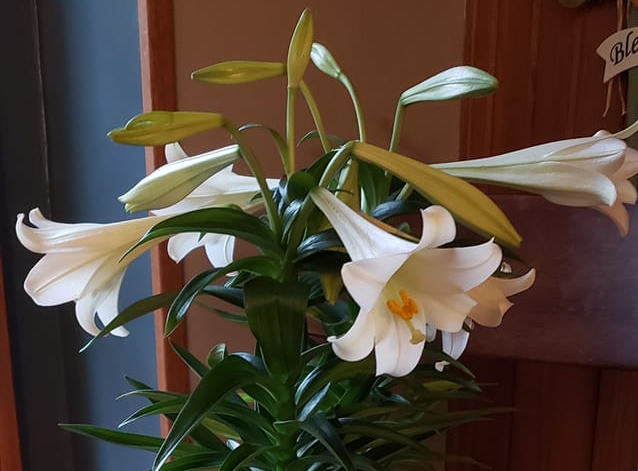 I remember someone pointing out to me when I was a child that in protestant churches we display empty crosses instead of the crucifix that has Jesus still on the cross, with the explanation that we celebrate the resurrected Christ, alive and living in us.  The cross reminds us of how Jesus conquered sin and death for us by dying and being resurrected.

But it wasn’t until 300 years after the resurrection, when the Emperor Constantine made Christianity the state religion, that Christians started using the cross as a symbol.  Before that, Christians were being persecuted, and the fish was their secret symbol that they used to identify each other.

In those early days, Christians couldn’t gather in public, so instead they met in the catacombs.  Underneath Roman cities, there were tunnels and caves that had been dug out by Roman slaves.  These were where they put dead bodies.  The Romans were afraid of death, so they hid the bodies where they’d never see them.  Since the Romans were afraid of death, they never went into the catacombs, and so this was a safe place for Christians to meet.[1]

Years ago, when my family lived in Southern California, our church had an annual camping trip.  Every summer we would spend a weekend at the same campground in the hills north of Ventura.  There was a spot in that campground where a road had been cut through the center of a small hill.  The branches of the trees on either side reached across the top, so it was like going into a tunnel, and every year, as it started to get dark on the first night of camp, we would go to that spot to gather and pretend we were early Christians meeting in the catacombs. Our leader[2] would bring a lantern and set it in the center of that hollow, and encourage us to gather around the light, telling us that this is what those early Christians also did.  She spoke only in a whisper and she made sure we all did the same, since we were meeting “in secret.”  She would use a stick to draw a fish in the dirt, telling us that this was the symbol those ancient Christians used.

Our current situation, each of us staying home and only meeting together online, reminds me of meeting in the catacombs. We aren’t exactly hiding from the government like they were, since we’re broadcasting this publicly on Facebook, but we are isolated and, in a sense, hiding from the virus.

And our worship today is probably a lot more like worship in the catacombs than what we normally do. We’re used to our grand and joyful Easter music, but in the catacombs singing was likely done quietly and without instruments, since they didn’t want to risk attracting attention.  Most of the traditions we associate with Easter today weren’t around then, and many have only been around for a couple of hundred years and some even less.[3]

All of these things are nice, but they are merely symbols that point us to the reason we celebrate Easter, the resurrection of Jesus Christ.  And even more importantly, what that means, that Jesus died for our sins and for our salvation, so that through him we could have forgiveness and a relationship with God that continues on into eternity.  Jesus’ resurrection is proof of that promise. Paul explains this in 1 Corinthians 15:17-20:

“…if Christ has not been raised, then your faith is useless and you are still guilty of your sins. In that case, all who have died believing in Christ are lost!  And if our hope in Christ is only for this life, we are more to be pitied than anyone in the world.  But in fact, Christ has been raised from the dead. He is the first of a great harvest of all who have died.”

Staying quarantined inside our homes is also more like what was happening on that day that Mary Magdalene went to the tomb.  The rest of the disciples are hiding at home, afraid that those who had arrested Jesus would also come after his followers.

When Mary sees that the stone has been rolled away, she runs to get Peter and John.  They run to see for themselves, and once they see that the tomb is indeed empty, they run back home.  Were they running out of urgency?  Did they run home so they could hide their response?[4] We can’t say for certain.

But John tells us that Mary stayed, and that she wept because she thought someone had stolen the body (v11-13). Then she sees Jesus, though at first she doesn’t know it’s him.  He asks her why she’s weeping and who she’s looking for, even though he surely knows the answer.  She thought he was the gardener, until he said her name.  “Mary.”  Then she recognizes him and says, “Rabboni!” which means teacher (v16).

Maybe she was about to hug him, because then he says something rather curious.  “Don’t cling to me for I haven’t yet ascended to the Father” (v17).  Don’t hold on to me, for there’s still more to be done.[5]  Things would not go back to the way they were before Jesus died and was resurrected.[6]  This was the dawn of a new age.  Jesus would ascend into heaven and be seated at the right hand of God the father, as we profess in our creeds.  And then the Holy Spirit would come, as Jesus had explained during their last night together in the upper room.  In John 16:7 Jesus says, “it is better for you that I go. For if I do not go, the Advocate [the Holy Spirit] will not come to you. But if I go, I will send him to you.”

God was doing something new, something we see the disciples working to explain to the world in the book of Acts.  In Acts 13, Peter explains borrowing words from the prophet Habakkuk: “For I am doing something in your own day, something you wouldn’t believe even if someone told you about it.” (Acts 13:41)

Today, as we celebrate Easter in a new way, we remember that the resurrection is why we celebrate.  Maybe our celebration today is a little less joyful at first because we’re missing those traditions.  Maybe our celebration is a little less joyful because we celebrate today in the face of so much death.  So many have died because of the pandemic.  Some of us are mourning friends and family members who have died this past week from other causes.

We probably prefer the joy of Easter to the sadness of grief, but it’s important to acknowledge our grief.  It’s ok to acknowledge that things aren’t the way we would like them to be.  But we do not mourn as those who are without hope. (1 Thess. 4:13) because we know that Jesus conquered death just as he said he would. God keeps his promises.  And so although we may be grieving the things we have lost and the people we have lost or are apart from, we know that God’s love remains.

The Old Testament text appointed for today is one we might not pay much attention to on a normal Easter, but it seems particularly fitting for this celebration of Easter from our homes:  Jeremiah 31:1-6.  It’s written to people who are in exile, who have been captured by an enemy army and carried off to a far-off land. Some have called this time of social distancing exile. Jeremiah’s writing is full of sadness and admonition about their situation and about their sins, but in this chapter Jeremiah gives them words of hope, hope for restoration:

31 “In that day,” says the Lord, “I will be the God of all the families of Israel, and they will be my people. 2 This is what the Lord says:

“Those who survive the coming destruction
will find blessings even in the barren land,
for I will give rest to the people of Israel.”

3 Long ago the Lord said to Israel:
“I have loved you, my people, with an everlasting love.
With unfailing love I have drawn you to myself.
4 I will rebuild you, my virgin Israel.
You will again be happy
and dance merrily with your tambourines.
5 Again you will plant your vineyards on the mountains of Samaria
and eat from your own gardens there.
6 The day will come when watchmen will shout
from the hill country of Ephraim,
‘Come, let us go up to Jerusalem[a]
to worship the Lord our God.’”

One of the words that Jeremiah uses frequently in that passage is the word “again.”[7]

“You will again be happy.”  “Again you will plant your vineyards…”

That word “again” is embedded in our language more than we realize.  How many of the words that we use in talking about God and Jesus start with the prefix “re”?  “re” means “again.” Rejoice.  Remember.  Renew.  Restore. Revive.

I’ve noticed something the past few weeks that I’ve never noticed before – the dawn chorus.  I’m sure it was there before, but for some reason I never noticed before.  The dawn chorus is the birds.  They start singing their hearts out at first light.  Scientists have several theories about why they do this.  Some think it is a mating call. Some say the birds are telling one another, “I’m here and I’m ok. I made it through the night.”  Each bird has its own unique song. Different varieties of birds sound similar to one another, but none sing exactly the same.[8]

May each new day be an opportunity for us to sing out and say “I have seen the Lord!”

May each new day remind us that just like the sun rises each morning, Jesus the son is risen from the dead, and our God of hope is always waiting to renew and restore us, always offering us a fresh start whenever we repent and return to him again.

May each new day remind us that Jesus is our hope again.

[2] This was Grace Hughes and what was then called Simi Valley Presbyterian Church, now called Stonebridge Community Church.

[4] Thomas Long says, “All of this haste communicates that the resurrection is an emergency. Something has happened that demands urgent action, even though the first responders do not fully know what has occurred.”

[5] Thomas Aquinas says the ascension is part of the work of salvation. http://media.ascensionpress.com/2017/05/24/jesus-ascend-heaven-answers-scripture-aquinas/

[6] https://www.gotquestions.org/touch-Mary-Thomas.html says: In loosening Mary’s hold on Him, Jesus was, in effect, saying this: “I know you desire to keep Me here, always present with you. I know you want everything to be just the same as before I died. But our relationship is about to change. I’m going to heaven, and you will have the Comforter in My place. You need to start walking by faith, Mary, not by sight.”

[9] Jurgen Moltmann, A Theology of Hope