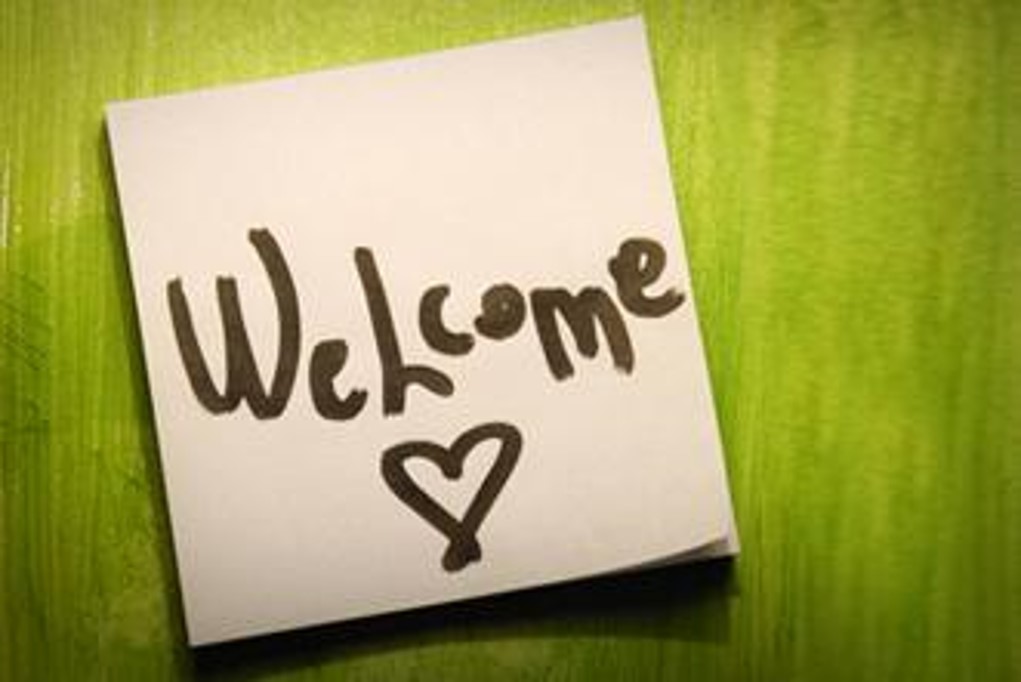 If you’ve studied leadership, you have probably heard of Harvard professor Ron Heifetz, and maybe also about the unusual way he welcomes students on the first day of his class. The students enter the classroom to find Prof. Heifetz sitting at the front of the room looking down at the floor, not acknowledging them, not doing or saying anything.  Just sitting there.  The students find their seats and sit, quietly waiting for the professor to start speaking.  But he doesn’t.  He remains silent with his head down. . . So they keep waiting. But as the minutes pass, they begin to get nervous and anxious.  They think, “What is happening?  What are we supposed to be doing?” Then they start asking these questions out loud.

“Is he just going to sit there?” “I don’t have all day.” “No, I think this is the point.” “So what should we do?” “Shhhh . . . Maybe he’s getting ready to speak.” “Don’t shush me. I have every right to talk.”. . . The popcorn of conversation goes on for what seems like an eternity but is really about five minutes. Eventually, Heifetz looks up at the class and, to everyone’s great relief, says, “Welcome to Adaptive Leadership.”[1]

Heifetz is demonstrating the importance of leadership, but he’s also showing why effective welcoming is active.  As the professor, Heifetz plays the role of a host welcoming students into his space, his classroom.  When he doesn’t do or say anything, the students don’t feel welcome, they feel anxious and confused.

In the classroom situation I just described, the students might have known they were welcome there by the fact that they were enrolled in the class and paid their tuition, and they would know from experience that attendance is expected, but they still didn’t feel welcome and comfortable being there until the professor actively welcomed them.

It’s the same when we are welcoming someone to any new place – our home, our workplace, our church.

Radical welcoming is active and intentional.

Think about the last time you went somewhere you’d never been before.

In this letter to the Roman Christians, Paul has spent considerable time explaining and justifying his conviction that though his mission is to bring the message of the gospel to the gentiles, or, as the Message version puts it, the non-Jews, Paul is not ready to give up on the Jews.  Paul even says in Romans chapter 9 that he would even give up his own salvation if that would mean that the Jews would accept Jesus as the Messiah and receive God’s grace through faith in Jesus.  Some of the Gentiles thought that Paul was wasting his time trying to convince the Jews, and some Jewish Christians thought Paul was going too far by accepting the Gentiles without requiring them to become Jewish.  This was the big divide in the early church.

That’s why, in the passage we read today, Paul gives several proofs from the OT scriptures to show that God’s love and salvation is for both the Jews and the Gentiles, or as the Message version puts it, for both insiders and outsiders.

In Paul’s day, the biggest conflicts were about accepting the Gentiles, the non-Jews.

What conflicts are we dealing with in today’s world?  Who gets excluded?

In the book Unbinding the Gospel, Martha Grace Reese describes her research into church transformation.  She makes a somewhat surprising observation.  We might expect that differences in preference and understanding would be age-related – older people versus younger people.  Instead, Reese “found little difference between the opinions and perceptions of old and young people who had been raised in the church.  The real differences appeared between those who were raised in the church and those who weren’t.”[2]

So even if we think we know what people outside the church are thinking, we may have been in the church too long to really know without asking.

When I was seven, I slid down the banister in our house and . . . I broke my leg.  While I was still in a cast, my friend that lived across the street invited me to spend the night. I remember being miserable because my friend’s mom was going overboard trying to take care of me.  I just wanted to play with my friend, and her “hospitality” was “killing me.”  She didn’t know what the problem was and I had no idea how to tell her.  Finally, after I started crying, she asked me, and things got resolved.

That mom was putting so much energy into trying to do what she thought I needed, but until she asked me, she didn’t really know.

“A seminary president once asked [a church planter] what her advice would be to people who want more young adults to attend their churches. [The church planter’s] response [was surprising]. [She] asked, would those same parishioners invite those young adults to dinner in their homes? Do they really want to be brothers and sisters in Christ, or do they just want more consumers of their church programs? My advice is to befriend people. Care about them, and let them care about you.”[3]

The cool reality is that many of you already do this through the Sterling College HOST program (that used to be called “foster families”). HOST families are people who want to be the student’s home away from home, and so these families open their homes for the students in a variety of ways, inviting them to come for meals, to go to church together, to attend College activities, and they invite the students to join family activities.[4]  I know that some of you have been doing this for years, and that students you’ve hosted even come back to visit, and you’ve brought them to church, which is awesome.  This is the time of year that the college is working on matching up new students with HOST families, so if you’re interested in doing this, contact the student life office at the college.

God blesses our efforts.  Welcoming is a spiritual act.  Jesus told his disciples:

Priya Parker, in her book The Art of Gathering, talks about active welcoming, but Parker calls it “generous authority.”  That sounds almost like an oxymoron. Generous authority means that the host takes charge, but not for selfish reasons, not simply to exert dominance or control, but in a generous, selfless way, to make sure that guests have the best possible experience, and to make sure the gathering stays on track with its purpose.

One of the best examples, according to Parker, is Nora Abousteit. Nora is an entrepreneur and social crafter who is well known for the gatherings she hosts. Nora is intentional about guiding guests and helping them to get to know one another, and encouraging them to take care of one another.  At some gatherings, she will assign one guest at each table to be the “water minister,” making sure everyone at the table always has enough water.  Another guest will be the “wine minister,” and so on.[5]

At one her parties, there was a portion of the evening during which people were seated at tables of six. Nora had spent days planning the groupings, because there would be guests from all over the world, and she wanted them to be able to find commonalities despite their varied backgrounds. She was careful to split up couples because they didn’t interact with the rest of the group as much when they were together.  At the event, as she was looking over the room, she spotted one table where there was a young women who had left her own table to go to her husband’s table.  She was sitting in his lap, and the rest of the people at that table were stuck awkwardly trying not to notice.  So Nora escorted the woman back to her own table.

Nora’s purpose that night was to make sure everyone was engaged and able to participate.  She used her authority as host to make sure that happened, even at the risk of being disliked. Why did it matter? “They were breaking harmony,” Abousteit explained. “They were only thinking about themselves and their own needs and not about the group. In a group, if everybody thinks about the other person’s needs, everyone’s needs are actually fulfilled in the end. But if you only think about yourself, you are breaking that contract.” She continued: “I was really upset because it’s not fair to the other people at the table.”[6]

Active welcoming is what we see in many parts of the Bible, and this is what we find Abraham doing in in Genesis 18. Abe sees three passing strangers.  He runs out to greet them and urges them to stop and rest.

3 “My lord,” he said, “if it pleases you, stop here for a while. 4 Rest in the shade of this tree while water is brought to wash your feet. 5 And since you’ve honored your servant with this visit, let me prepare some food to refresh you before you continue on your journey.”

6 So Abraham ran back to the tent and said to Sarah, “Hurry! Get three large measures of your best flour, knead it into dough, and bake some bread.” 7 Then Abraham ran out to the herd and chose a tender calf and gave it to his servant, who quickly prepared it. 8 When the food was ready, Abraham took some yogurt and milk and the roasted meat, and he served it to the men. As they ate, Abraham waited on them in the shade of the trees.

Abraham does quite a bit of running around to take care of his guests.  He’s demonstrating some seriously active welcoming.  This church is great at being like Abraham, with the home-baked bread and roasted meat.  I’m thankful to have been included in your generosity and hospitality.  I’m also thankful for Dos Amigos, Clive’s, Broadway Market, and Brew 56, so that I can enjoy coffee or a meal with people and not have to cook!

Whichever way works for you, let’s remember to enjoy gathering together and getting to know each other more, and let’s be sure to include new people in our gatherings, so that all can enjoy the generous welcome we all have in knowing God’s love through Jesus Christ.

In Philippians 2, Paul tells how:

3 Don’t be selfish; don’t try to impress others. Be humble, thinking of others as better than yourselves. 4 Don’t look out only for your own interests, but take an interest in others, too.

5 You must have the same attitude that Christ Jesus had.

6 Though he was God, he did not think of equality with God

as something to cling to.

7 Instead, he gave up his divine privileges;

he took the humble position of a slave and was born as a human being.

When he appeared in human form,

8     he humbled himself in obedience to God

and died a criminal’s death on a cross.

9 Therefore, God elevated him to the place of highest honor

and gave him the name above all other names,

that at the name of Jesus every knee should bow,

in heaven and on earth and under the earth,

11 and every tongue declare that Jesus Christ is Lord, to the glory of God the Father.