This past week, my husband Rob and I watched a movie on Netflix called “Don’t Look Up.” It’s a satire about a scientist who spends time observing the night skies through the high-powered telescope at the university where she’s working on her PhD, and though she wasn’t looking for comets, she discovers one.  When she calculates its path, she finds that it’s on a collision course with Earth.  The comet is large enough that this would be an extinction-level event.  She shows the data to her supervisor for verification. He checks the math and comes up with the same result.  As they share the data with other scientists, their findings are confirmed.  The comet is coming and they’ve got to do something right away.

But as they go out to spread the word and try to get the government to do something to stop it, they mostly find that no one wants to believe them. As the comet gets closer, it can be seen without a telescope, and you’d think that this would get everyone to believe and see the danger, but it doesn’t.  Some still deny its existence and even adopt the slogan, “Don’t look up.” Hence the name of the movie.

One way to deal with world-changing news is to deny that it’s real. No one wants bad news, especially if it might be a threat to power or to the status quo or life on earth as we know it. But what if it’s an opportunity for something good to happen?

The scientists in the movie reminded me of the magi in today’s reading from Matthew.  The magi were astronomers, scientists in their time, who studied the skies. They have seen a star arising that is a sign that the Messiah has been born.  So they follow the star to find Jesus.

Like much about the Christmas story, we’ve romanticized the story of the magi and added details that aren’t in the Bible.

The song that we sang at the beginning of worship (We Three Kings) was the first popular Christmas carol to be written in America. It was written in the early 1800s for a Christmas play in which the three kings sang the first and last verses together, and each king had a solo for verses two, three, and four.[3]

Whoever the magi were, they got to Jerusalem by following the star, and then they asked around for help to find Jesus, probably expecting that people might already know about something so important as the birth of the Messiah.

It seems like the chief priests and scribes haven’t seen the star, but they do know the prophecy from Micah that says the Messiah would be born in Bethlehem.  Before the magi can head in that direction, King Herod wants to meet with them privately. Herod calls himself the King of the Jews and has achieved and held on to power by eliminating anyone who gets in his way. He seems to know just what to say to the magi to get them to come back and tell him where they find Jesus. He says he wants to know “so I can worship him, too.”  But he’s just being manipulative, and an angel warns the magi in a dream not to go back to Herod.

Our other reading from Isaiah foretells the coming of the Messiah and anticipates the light of hope that he will bring, and the gifts that will be brought to him. Gold and Frankincense.  But wait, there’s myrrh.  Matthew adds the myrrh.  The carol we sang says the gold was symbolic for Jesus being the king of kings, the frankincense is symbolic of worship, and myrrh is for death and mourning, anticipating Jesus’ death.

[4]Isaiah says to “arise and shine, for your light has come.” It’s a call to see for yourself what is happening.  Verse 4 says, “Lift up your eyes and look around.” Despite the darkness and despair that sometimes clouds our vision and keeps us from knowing God’s presence, God comes anyway. God is here. So look up. Keep looking. Who knows what you might see?

Today we’re giving out words on a paper star, symbolic of the star that led the magi to Jesus.

For those of you who are online, I will draw one for you and get it to you so you can have the actual star. Message me or the church and I’ll get one to you.

The word on the star is to help us to seek Jesus, maybe in new ways, to look up and see what is happening around us, and maybe consider how we might find new ways to share God’s love with one another.

What you do with it is up to you. Maybe you’ll meditate on your word, or find Bible verses with your word. Maybe it will inspire you to draw or paint or play some music or do some research or write something. As you do that, I hope it will help you to connect with God.

In January of 2020, when we gave out star words, my word was “acceptance.”  I didn’t like that word because it felt ominous to me, like bad things were coming. Turns out I was right.  Not long after that, we learned about COVID-19 and since then we’ve had all kinds of lessons in accepting new realities.  The word “acceptance” helped me to see how grief was a part of our COVID experience, and reminded me to keep trusting God to guide us through.

Last year, the word I got was “tenderness.” I learned that tenderness is an attribute of God. James 5:11 says, “the Lord is full of tenderness and mercy.” God is compassionate and we also need to be. This star word reminded me to pay attention to my emotions and not let hard-heartedness and cynicism stick around. But honestly I’ve had a tough time connecting with this word, and connecting with God about this word because I’ve been struggling with depression, and that’s often made it hard to pray. I’m getting help from my doctor and a counselor, but seeking help requires some vulnerability, some tenderness. It’s hard. I know some of you suffer with this too, and know how hard this is.

We’re celebrating Epiphany today, but the actual day, the 12th day of Christmas, was last Thursday, January 6. On that day, the Pray As You Go devotional app said this: “The magi brought gifts to Jesus. If you were to bring a gift, what would you bring?”  My first response was broken heartedness.

Psalm 51 tells us that the gift God desires is a broken and contrite heart.

In Matthew 5, Jesus says, “Blessed are the poor in spirit, for theirs is the kingdom of heaven.” 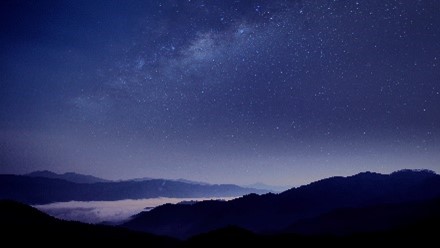 Jill Duffield, the writer of our Advent devotional book Advent in Plain Sight, tells about moving from the city to the country as a child and discovering that in the darkness of the country, away from the city lights, she could look up and see the stars. Before that, she hadn’t known how beautiful the night sky could be. She says, “Epiphany reminds us that it is in dwelling in deep darkness and looking up into the vastness of space that we find the star that leads us to Jesus.”[7]

Duffield says, “Discovering Jesus, being found by him, moves us to go out and look up, to see beauty where we never noticed it before, to be unafraid to go out into the dark, to expand our horizons in ways that cause us to care for all creation, not only the few feet directly in front of us.”[8]

But God is with us, even in the dark. Maybe the stars can help remind us of that.

[1] Photo by Justin W on Unsplash

[4] Photo by Aziz Acharki on Unsplash

[5] Photo by Josh Boot on Unsplash

[6] Photo by Chan Hoi on Unsplash