How old is too old? How young is too young?

How young is too young to build your own house?

How young is too young to win a Nobel Peace Prize?

“She became a target of the Taliban as an 11-year-old …for her refusal to obey orders banning girls from school. At age 15 she survived being shot in the head, and that same year she launched the Malala Fund, a global girls’ education charity. At 16, she made a speech at the United Nations on the need for gender equality. Then at 17, after writing a memoir about her life and experiences and becoming an international best-selling author, she became the youngest Nobel Peace Prize laureate.”[2]

How young is too young to have a song that’s #1 on the pop charts?

How young is too young to make a movie?

How old is too old to get a college degree?

“…received her associates degree in social work from College of the Canyons in Santa Clarita, California.” She did it because she was “bored with her life.” So she decided to pursue her “long-deferred dream. She took two classes at a time and always sat in the front. She even conquered her fear of technology, so much so that playing computer games became a favorite activity.”[5]

And God says, “Don’t tell me you’re too young.”

How young is too young? Age is not an obstacle to God.

Timothy thought he was too young to lead the church in Ephesus, but Paul encouraged him, saying:

“Don’t let anyone look down on you because you are young. Instead, set an example for the believers through your speech, behavior, love, faith.” 1 Tim 4:12

What does God tell Jeremiah about being too young?

It’s not Jeremiah’s age that matters, but that God is with him. Jeremiah needs to trust God.

What strikes me the most about God’s call to Jeremiah, though, is that it’s not all sunshine, lollipops, and rainbows. God says:

“This very day I appoint you over nations and empires,
to dig up and pull down,
to destroy and demolish,
to build and plant.” V10

On 30th Street in Hutchinson there’s a big piece of property that used to be a K-Mart.  It’s been empty since before I moved here.  This past week, I noticed they’re digging up the parking lot.  They’re taking out the old to make way for the new.  Parking lots wear out over time, and sometimes the only way to make them flat is to tear out what’s crumbling and put in new pavement.

It’s the same with life improvements. We have to address the things that get in the way –

Fear, Pride, Feelings of inadequacy, our natural tendency to shy away from doing hard things

What keeps us from being the people God calls us to be?

Jeremiah is in worldly terms a failure.  He is poor, and not well liked. He has trouble getting people to listen to him because they’d rather listen to the prophets that give them happy prophecies.  Jeremiah is warning them that destruction is coming and that they need to turn away from their idols, start treating people fairly, and turn back to God.  The other prophets are preaching lies, saying, “Peace, peace, when there is no peace” (Jeremiah 6:14; 8:11).

During this time, the reign of King Josiah, there is a great reform and they clean all the idolatry out of the temple and renew the practices of worship that Moses had taught them.  But Jeremiah points out that they have only made surface level changes.  Inside, their hearts are still far from God.

We keep finding this sort of thing at our house.  We’re painting the fireplace, so we took the mantle off, and underneath we discovered that the paneling that covers the wall above the fireplace was put on over a layer of wallpaper, and that wallpaper was put over another layer of wallpaper, and underneath the wallpaper is the brick that is the original fireplace.  From the outside it looks like a wood wall, but inside it’s still brick.

On the outside we can seem like everything is fine, but on the inside we can be chaos, loneliness, despair, anger, fear, depression, greed, hate. 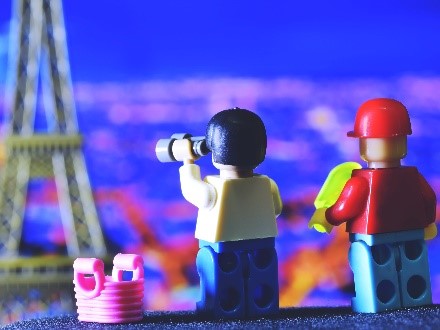 It’s kind of like what happens in the Lego movie that came out in 2014.[7] The song that pervades the movie, “Everything is awesome…” is the song that those in charge use to pacify the people, to tell them everything is fine.  But it’s not fine.  There’s an evil plot to glue the Legos together with superglue to stamp out creativity and prevent change.  It’s safer and easier for those in power when everyone is the same.

But the whole point of Legos is to be creative.  To build things, and then take them apart and build something else.  To glue them together is to kill the fun of being creative.

God is always doing new things. That’s why it’s never too late or too early to say yes to God.  Our ability to do whatever God’s calling us to do is not based on our age or ability, it’s based on who God is. God doesn’t leave us to do it all on our own.

God tells Jeremiah, “I will go with you.”  God made the same promise to Abraham and Jacob and Moses and Joshua.  When Joshua was leading the people into the Promised Land, God said, “Be strong and courageous, for the Lord your God is with you wherever you go.” (Josh 1:9)

Joshua couldn’t have led the people all by himself.  We can’t do what God calls us to do alone either.  We need God because he’s the brains and the strength and the heart.  God promises to go with us, too.

[8]We need God’s strength because we’re too much like aluminum.  Aluminum is the most abundant metal on earth and the third most abundant of all the elements.  It has all kinds of wonderful properties.  It’s light. It doesn’t burn easily.  It’s flexible.  We probably all have a roll of aluminum foil in our kitchens.  But except for foil, aluminum is not often used all by itself.  It’s too weak.  So it’s combined with other metals as an alloy.  The strength of these other metals combined with the lightness of aluminum makes it great for cars, airplanes, cooking utensils, and a whole bunch of other things.[9]  Aluminum can do more as an alloy than it can by itself.  And we can do more with God that we can on our own.

We need to say yes to God, and we need to trust in his strength, not our own.

4 Such is the confidence that we have through Christ toward God. 5 Not that we are sufficient in ourselves to claim anything as coming from us, but our sufficiency is from God, (2 Cor 3:4-5)

God promises to go with us, and, like he tells Jeremiah, he will give us the words to say.  When Jesus is speaking to the crowd one day, he tells them the same thing.  He says, “When you need to speak, the Holy Spirit will give you the words to say.” (Luke 12:12)

Maybe that’s the thing we wonder about the most.  How does that work?  How does God give us the words to say?   Jesus gives us an answer to that.  He says, “Stay connected to me. Abide in me.” (John 15) We have to stay connected to the source of the words.

There’s an episode of I Love Lucy[10] in which Ricky’s mother has come to visit.  That by itself might be troubling, but there’s a bigger problem than usual.  Ricky’s mother only speaks Spanish, and Lucy doesn’t know any Spanish.  So, in usual Lucy fashion, she hires a man who speaks Spanish to tell her what to say.  The man is hidden in the kitchen and speaks into a radio that only she can hear.  It works great, until the man leaves unexpectedly.  Suddenly Lucy has no idea how to say anything because she’s lost her source.[11]

Like Lucy, we need to stay connected to God, our source.  The easiest, most basic way is through prayer.  In the moment in which we need to speak, we can just say, “God, help me speak.”  When there’s time for a longer prayer, I like to use an adaptation of an old Celtic prayer:

God be in my head and in my thinking, in my mouth and in my speaking,

in my heart and in my feeling, in my hands and in my doing,

in my feet and in my going.

Part of having God’s words is stocking up on God’s word.  The more we read the Bible, the more those words become part of our thoughts, and the more the Holy Spirit can use them to help us know what to say.

Another way to stock up is to take time to write down the ways that God has helped you.  This helps us be able to remember them later when we face similar situations, or when we have the opportunity to help someone else in the same situation.  For example, those who are recovering from addictions are the best people to help others learn how to fight their addictions because they understand the problem better and can tell about how God helped them.

We will face challenges when we say yes to God.  In fact, it’s been said that one way to know we’re on the right track in following God is when we find ourselves in difficult situations, especially if they’re situations we wouldn’t have been in if we weren’t following God.  T.S. Elliot said, “If you aren’t in over your head, how do you know how tall you are?”  If we aren’t in over our heads, how will we know how big God is?

Following God and trusting him in the midst of challenging situations is how we grow.  Being prophets to the world around us, we help others know God’s love and promises, and bring hope as we trust in God.  This is what Jeremiah did for Israel, and what we do for each other when we answer God’s call.

Clearing the way for God to work in our hearts, our lives, our church, our world,

won’t be all sunshine, lollipops and rainbows, everything won’t always be awesome,

but God promises that we won’t be doing it alone.