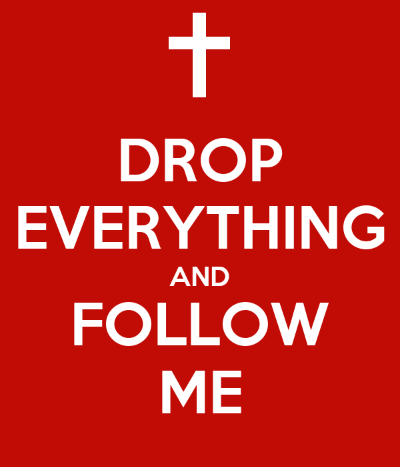 I think the world decided to drop everything and make Bernie Sanders memes this week.  It started with this photo of Bernie waiting for the inauguration to start Wednesday morning.  The original shot was taken by Brendan Smialowski, a photojournalist working for Getty Images. Within hours, the internet started blowing up with memes.[1]

Was Bernie offended?  Turns out not at all.  He says he even made a few memes himself.  Not to be outdone, Bernie almost immediately had sweatshirts for sale and within 24 hours those shirts were sold out! 100% of the proceeds are going to Meals on Wheels of Vermont, and he’s raised in the neighborhood of $2 million![2]

In our scripture reading for today from the gospel of Mark, Jesus calls out to the men fishing.  “Come follow me.”  And immediately they dropped everything and went with Jesus.

The call to follow Jesus can happen in a million different ways, but usually comes with urgency, the need to repent (change), and always with God’s power and grace.

What is the call that Jesus’ makes to all of us?  It’s a call to discipleship.  It’s a call to trust and follow Jesus.  It’s a call to change. To repent. To take some sort of action.  In our reading today, Jesus’ message he was preaching was to repent, to change.  He said, “The time has come and the kingdom of God is here.  Repent and believe the good news!”

Jonah himself needed to repent, to change his no to a yes.  When he said no, he got on a boat heading for Tarshish.  Tarshish may have been a city on the coast of what is now Spain, or on the northern coast of Africa, or in what is now Turkey.[3]  Wherever Tarshish was, it meant Jonah was heading away from Nineveh, which was in what is now Iraq.[4] instead of heading towards it, as God had asked.  While Jonah was in the boat, a violent storm came up.  The sailors were alarmed and in danger of sinking.  Jonah told them to throw him overboard because he said his disobedience had caused God to send the storm.  After they threw Jonah into the water, the storm stopped, and Jonah, as he was sinking down into the ocean, was swallowed by a whale, and then spit out onto the shore.

So Jonah changed his no to a yes and went to Nineveh.  Then, when he got there, his message to the people was for them to repent, to change their ways and turn to God.

The call to discipleship, to following Jesus, requires us to repent, to make a change.  It also requires that we pay attention to the timing.  There is an urgency about answering the call.  Jonah told Nineveh that they had 40 days to repent before God would destroy the city.  Jesus told the fisherman to come as he was walking by.  They had to follow immediately to be able to go with him wherever he was going.

Not too long ago, our church answered a call that came with some urgency.  Each week, we encourage you to share prayer requests in the comments on our Facebook Live broadcast so that we can pray for one another. One week, one of those prayer requests was about a situation in which the person was in danger of being evicted from their home.  It was a call for prayer, but it was also a call for help.  Our session responded with a resounding yes.  Not long after worship that morning, one of our session members sent an email asking, “Are we going to do something about this?” That same person felt called to do something, and facilitated our response and donated the funds to meet the need, giving above and beyond their regular offering.  Emails were sent, and session members were quick to reply, and within just a few days we were able to send money that enabled the situation to be resolved.

I can think of times in my own life where looking back I can see that I missed an opportunity to say yes for a variety of reasons.  Either I took too long to think about it, or I was afraid, or I didn’t want to make the change that would be required.  In the early days of beginning to hear the call to become a pastor, I kept pushing the idea away as being impossible or improbable.  I remember telling people that I felt like Jonah, because I knew I was saying no to God, even though I wasn’t quite certain what exactly I was saying no to.  It’s an interesting quirk of my psychology that even though I wasn’t fully clear on what God was calling me to do, I was already saying no.

But God is merciful and gracious and gives us second chances.  The call to discipleship, to following Jesus, always comes with grace.  In the story about Jonah, we see that Jonah gets a second chance when the whale saves him from drowning and spits him up on the beach.   It may be that the story in Mark about Jesus calling these disciples was not the first time these fishermen had seen Jesus.  In John’s gospel we see them meeting Jesus not long after he is baptized in the Jordan River.  They showed interest then, but maybe they went back to fishing after that.  If so, then this story in Mark could have been Jesus giving them a second chance.  St. Ignatius says that this was the third time.  The first was in John one, the second in Luke 5, and the third here in Mark.  Seeing this, we learn that even if we’ve said yes before, we need to stay open to further calls.

I wonder whether sometimes we don’t say yes because we expect that there will always be other opportunities.  We hear the call to follow, but we want to think about it more, or we want to wait for a more convenient time.  But we need to be careful about this.  Some calls must be answered immediately.  The call to respond to that prayer request came with some urgency.  The eviction was already in process and they were about to be homeless.  By responding immediately, we were able to prevent them from being homeless.

Years ago, I had a friend who didn’t answer a call and has always regretted it.  It was a phone call from her brother.  She didn’t answer it because she was too busy to talk to him at that moment, and so the call went to voicemail.  She forgot about it and didn’t listen to the voicemail.  The next day, her mother called to tell her that her brother had committed suicide sometime the night before.  It was then that she remembered the voicemail.  It turned out that her brother had called to say goodbye.  She will never know whether answering that call might have saved his life.[6]

Not all of our opportunities to say yes to Jesus have such dire consequences, but some may.  And we do not know what tomorrow will bring for us or for those situations.  We don’t know in what way Jesus will call us, either.  Jesus’ call to follow might be as simple as responding to a nudge by the Holy Spirit to pray for someone or to give them a call.  It might be answering an email from the church about a request for help from a family in the Careportal, or an opportunity to make a commitment to become involved in a particular ministry, or to become a Christian.  Jesus’ call to follow might be to make friends with someone outside your usual circle, or to pay more attention to how our actions affect other people.  Earlier this year, our session answered a call, the call for our church to join with our denomination in becoming a Matthew 25 church, which means we are especially looking for ways to help eliminate systemic racism and poverty, and to increase the vitality of our church.  Jesus’ call to follow might mean giving something up that’s kept us from saying yes, or taking on something we aren’t sure we can do.

Jesus says, “The time is now.  Repent.  Come and follow me.”

Sometimes the call to follow is not about choosing whether to step into the situation, but instead about how to respond to a situation we did not choose.  This week there was a story in the Our Daily Bread devotional about a woman named Diane Dokko Kim.[7]  When her son was diagnosed with autism, she and her husband had to decide whether to say yes to Jesus by trusting God to guide them.  They grieved the death of their previous dreams for their son, and learned to trust God with their anger and fears.  Now, with their son reaching adulthood, they are also helping others who find themselves in a similar situation, and Diane has written a book about their journey called “Unbreakable Faith.” Though their faith faltered, they found that God’s love never fails.

Let’s watch for these opportunities to say yes, and listen for Jesus’ voice and the urging of the Holy Spirit, and see where Jesus will take us!

[6] This is a true story, though I don’t remember exactly who this was.  It was someone who lived in Simi Valley, CA.